On June 13, the third Summer Art Exhibition was successfully held at Dulwich International High School Suzhou. The exhibition was opened by Mr. Jia Hui, the director of the Public Education Department of Jinji Lake Art Museum. The media, students and parents all came to see the exhibition. 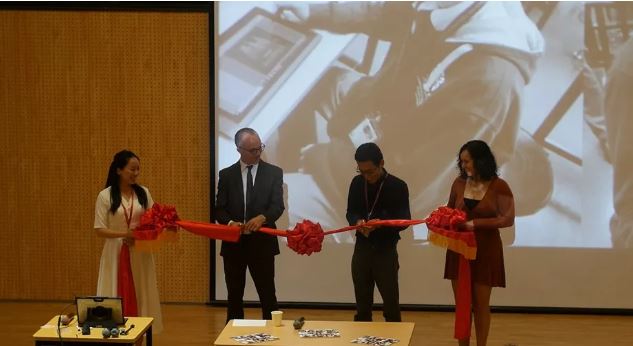 This is a special art exhibition featuring Dulwich’s students and graduates who are leaving the campus.

In our school’s I.M. Pei Gallery, is work by year 12 pupils who first visited an exhibition in Suzhou at the Jinji Lake Art Museum. That was an exhibition of contemporary Chinese painting and art installations, by artists who had visited the Canglang Pavilion (the blue wave pavilion in Suzhou) and responded to that experience. Our pupils went to both the exhibition and the garden where they created artworks from direct observation. From these initial experiments, they came back to the school art studios and produced their own work.

This year is the third consecutive summer art exhibition held by Dulwich International High School Suzhou. Compared with previous years, the overall standard of painting this year is higher. These students have been taught by the art team (led by Mr. Donald Short) since Year 10, and their paintings are of a higher standard. In addition, the exhibition also has a wider range of themes and ideas and employs a wider range of media.

Year after year, these art exhibitions have set up a stage for students to show their artistic talents. Mr. Donald Short said:

“Seeing the work on its own I think is quite an exciting and interesting way to finish off the projects. It also gives our pupils the experience of showing artwork and hopefully in years to come they will have the opportunity to exhibit more widely. It is also my hope that they will return to Suzhou where their creative journey began. Because they deserve Suzhou and Suzhou deserves them!”

This year, all of our year 13 pupils have successfully managed to gain places at the worlds top art colleges, including Rhode Island School of Art and Design, Parsons and Pratt, both in New York, as well as the University of the Arts London and Central St Martins.

Art enables them to discover a more interesting world in themselves

It is this strong artistic atmosphere that attracts many students to study art at Dulwich. 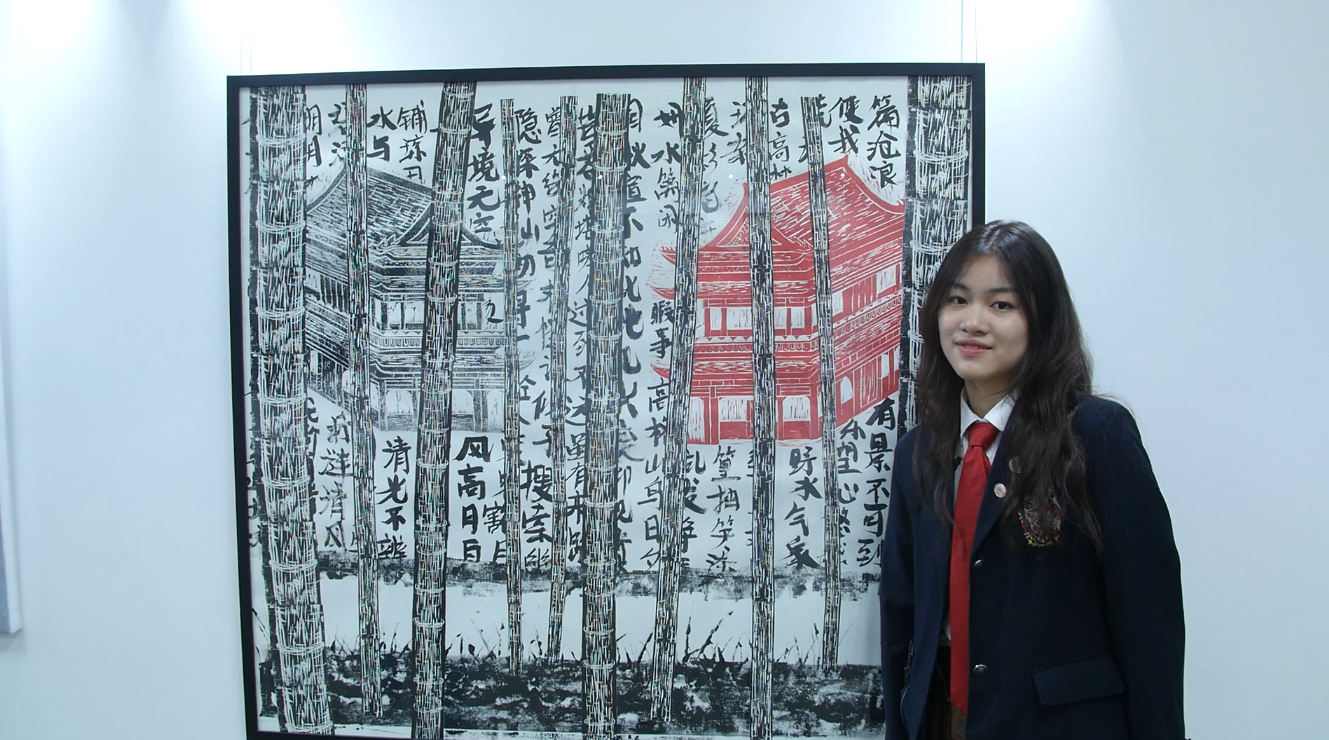 ▲Cytheria X and her exhibited works

Cytheria, in Year 12, was one of the students who came to Dulwich for its renowned art courses. "Actually, I transferred from another international school," she said. “I came here because of Dulwich’s art course. Among the graduates of this year, many of them are my friends. They all say that Dulwich’s art course is very good. I like art very much, and I want to develop it in the future. Coming here really gave me a big surprise." 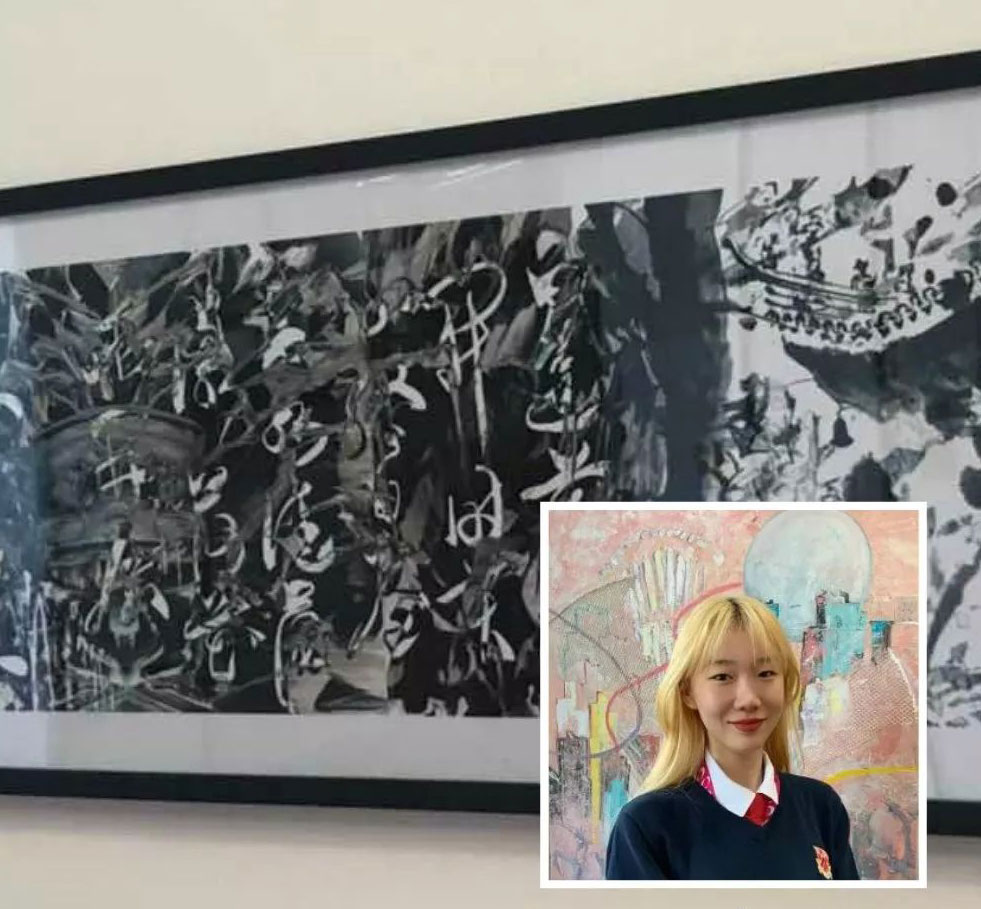 ▲Alice F and her work

For Alice, artistic creation is not only the release of imagination, but also the collision of various bold experiments. “In the process of creation, I suddenly imagined the impact of water-based pigments and oil-based pigments. What effect would it have? The results are surprising.” When visiting Canglang Pavilion, the water in the garden touched her most deeply. In order to present a special wave effect, she even found four large bricks, then painted the bricks, and scraped the water lines with a scraper. In the future, she wants to study architecture design more deeply.

▲ Sarah L and her work

The theme of Sarah's painting is "passway and journey". "I think the journey has actually started at the moment of waiting to start." In order to create this work, she intends to observe the state of people's journey in the train station, airport, bus station and so on during the Spring Festival. Thousands of photos were taken in each scene, and then came back for screening. In the creation process, she also used plastic, corrugated paper, lantern paper and other types of different materials. 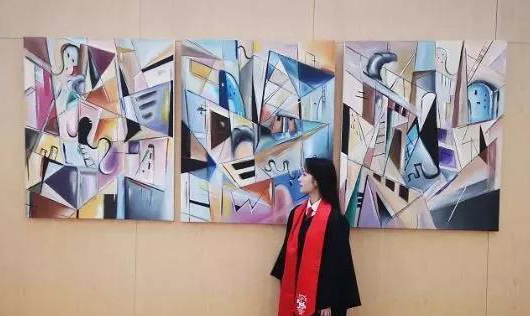 ▲ Yoona L and her work

Before coming to Dulwich, Yoona didn't know that she had talent in painting and had no foundation in painting before. "Elective art has opened a new world for me. In the second year, I got nearly full marks in painting. My Teacher said that I have a talent for controlling the colour of paintings." This year, she received offers from many schools to study architecture at Sheffield University. “In the future, I can incorporate the art of painting into architecture. My teachers said that my architectural designs work, not as a kind of rigid engineering, but as a form of art.”

Behind the amazing paintings by the visiting parents and the praised art courses by the students are a group of strong and passionate art teachers from Dulwich International High School Suzhou. Donald is American by birth and studied Fine Art and Painting at Camberwell School of Arts and Crafts, London. This period was followed by work experience as a television and film researcher, as well as a part-time journalist for the Times Education Supplement. For a number of years, he worked at Magdalen College School, Oxford, one of England’s top academic schools. In 2007, he took a sabbatical leave and completed an MA in Fine Art at the Arts University College, Bournemouth.

When he first arrived in our School in Suzhou, and examined the work of our students, he was surprised that there was absolutely no reference to either Chinese contemporary or traditional art. There wasn't even references to Chinese culture or the local environment in their work. That seems to be exceptionally strange. So he began the process of learning more about Chinese art, by visiting some of the local museums and also going to the local gardens. He has encouraged all of his pupils and team to send out the message that they should be looking at the art of their own country, as well as the art of Western Europe, North America and the UK.

“I am delighted to see so many of my pupils embracing Chinese art and culture and seeing it evident in their work. I hope that they don’t forget that, and when they go off to the United States or the UK, that they take some of that with them and then bring some of it back.” 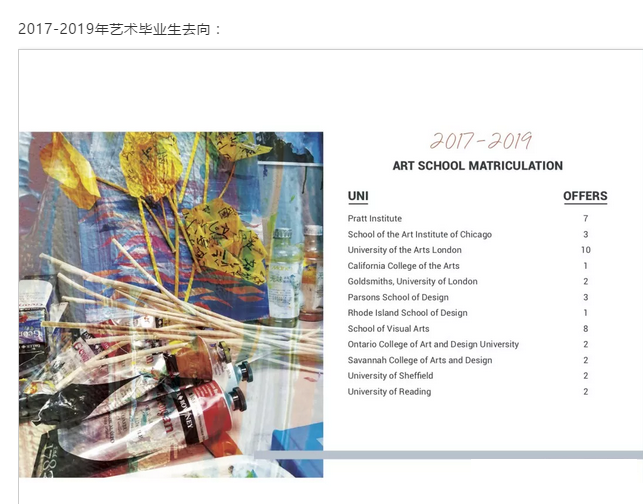 The importance of graphic communication cannot be understated in the department. The A level course was introduced two years ago and has been a considerable success. Over the course of those two years, pupils have gone on to study graphic communication or related subjects in some the UKs and the USAs top universities. This year we are introducing graphic communication at IGCSE with the view to creating a more solid platform for those advancing to A level. In particular, the chief moderator for Edexcel commented on the exceptional quality and breadth of the graphic communication portfolios and there is every expectation that this success will continue in the years to come. 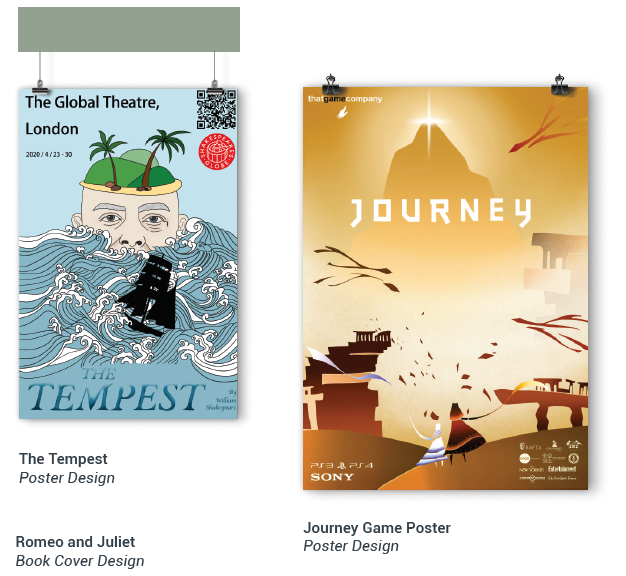 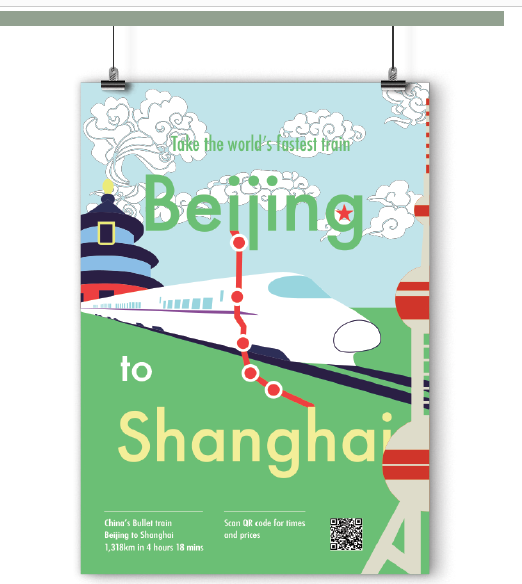 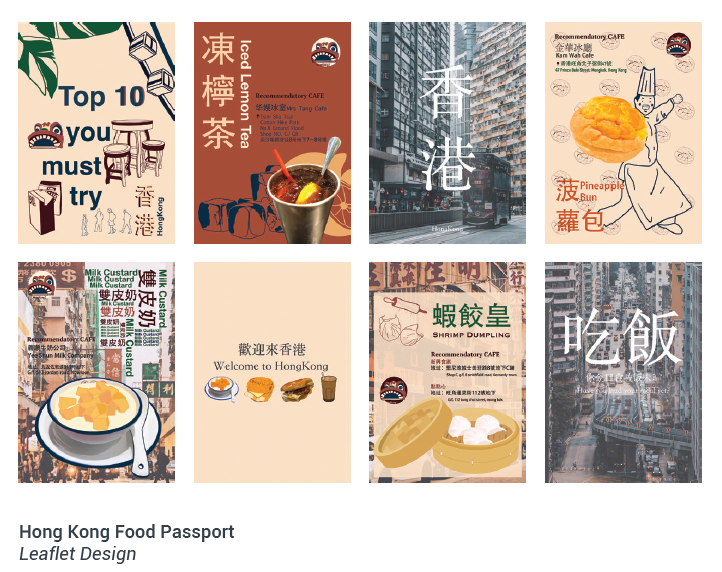 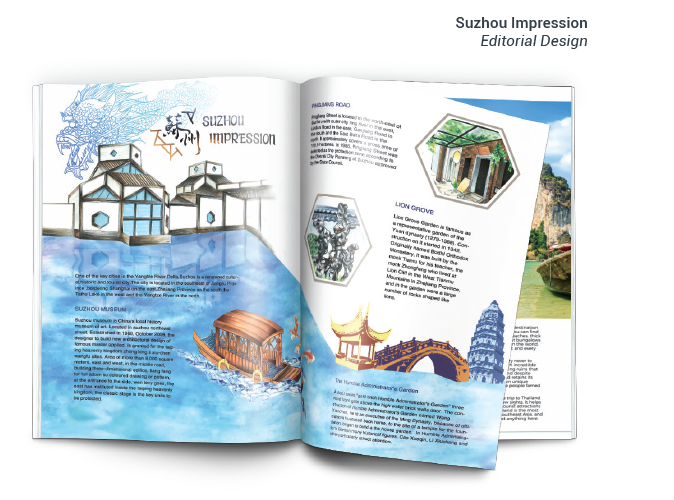 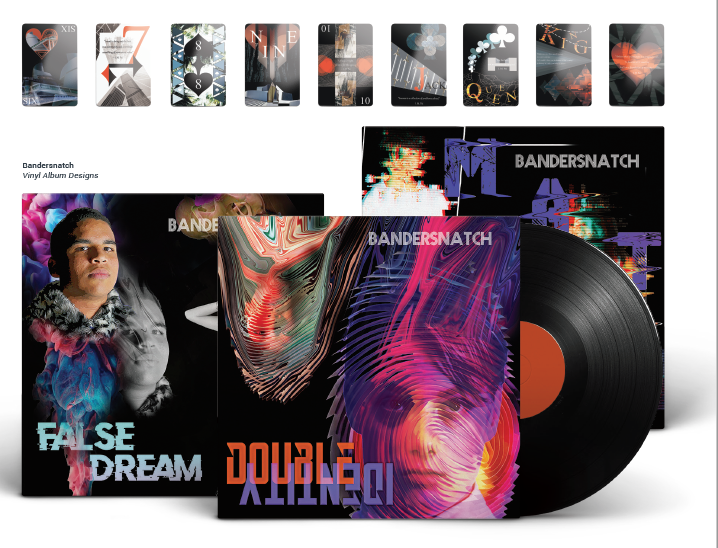 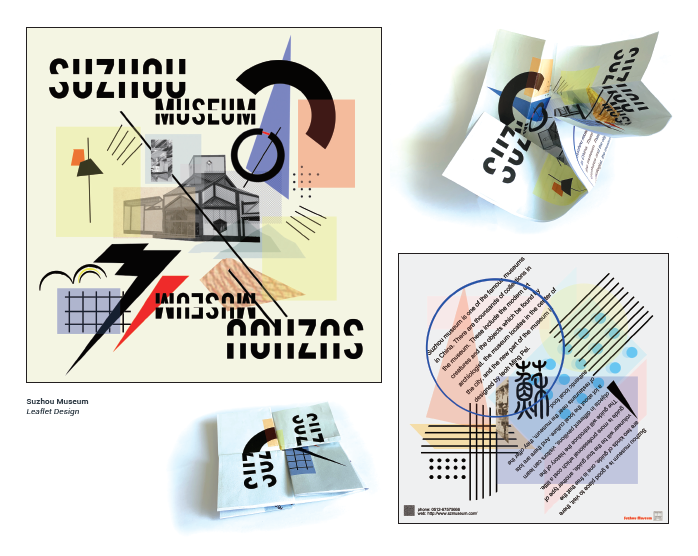 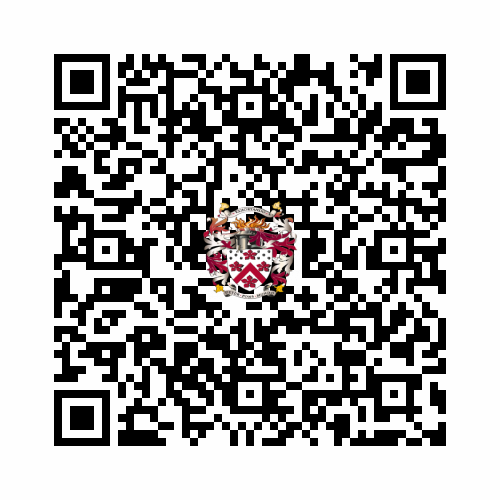