George is usually so busy studying and being involved with extracurricular activities that some of his friends refer to him as a workaholic. George regards school as his workplace and takes pride in the fact that every activity he has taken part in has been successful. He received an offer in February this year from his dream university – the Ecole Hoteliere de Lausanne.

EHL is a Swiss hospitality management school in Lausanne. The school is consistently regarded as the best hospitality school in the world.

Ecole hôtelière de Lausanne has been ranked at the top position in the 2019 QS World University ranking for Hospitality & Leisure Management Universities.

George said that studying at our school was a most memorable experience. The study environment at Dulwich International High School Suzhou is open and free, which made George feel comfortable. However, his path to entering our school wasn’t very smooth becausehe didn't pass the entrance exam the first time. Fortunately, he did pass the waiting list exam. His family and friends didn't understand the reasons that he chose Dulwich and initially George wasn't sure if he had made the right decision. However, after talking to students with excellent manners and elegant English diction, he realized that Dulwich was a great school. George is an obliging man, who is always willing to help others at school. He now thinks Dulwich was the perfect school for him, as it gave him the chance to participate in many kinds of extracurricular activities. This  benefitted his university application while also helping him to grow and mature into the excellent young man he is today.

Why did George choose to study Hospitality Management?

George explained, “The course of hospitality management at EHL doesn't just concentrate on the hotel industry, but also involves other related industries. EHL believes theoretical and practical learning are of the same importance. Therefore, it's suitable for students like me, who are not academically focused, but are passionate about activities.” 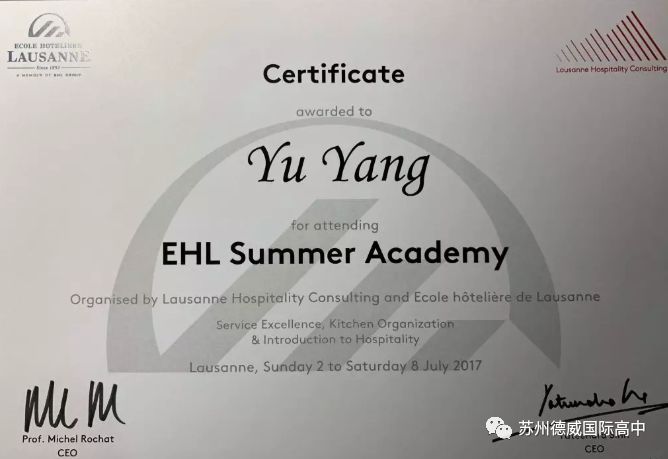 George has been interested in hotels since he was a child. His family told him that EHL was famous in the hotel management industry. He was born on the same day that a five-star hotel opened near his home. George smiled and said: "It's a very old-fashioned plot, but it happened to me. I may have a deeper relationship with hotel management."

George decided to apply for EHL in 2016, even though his teachers and friends did not think that he would be accepted. However, he was persistent and applied for a summer school placement at EHL, to learn more about his dream university.

During summer school, he was exposed to EHL’s curriculum which provided many practical activities. Rather than focusing purely on theoretical learning, he visited many hotels, restaurants, and bars. When he talked with other students at EHL he realized how important the language skills he had developed at Dulwich were. The summer school helped him build a relationship with the admissions officer and learn about the admission requirements. George didn't do well in one math exam, which had the potential to affect his university application in the future. His teachers told him to choose courses that related to his future university study. George then checked with the admission officer and discovered that he didn't have to do math in order to apply. So he chose to Study Economics, Geography and Music instead.

The application process is very complicated and contains multiple rounds. It took George a long time to complete and required him to be patient while waiting for the results. In February, George finally received an offer from EHL after waiting for four months.

The application process consisted of

After registration, many documents and details of past experiences are requested.

(George's topic was: Do you want to have a five-star hotel in a big city or a small hotel in a remote area?)

George went to EHL’s Admissions Office in Shanghai and participated in a full day of selection activities. These included icebreaking activities, a 45-minute full English interview, and online tests.

Step 4: Waiting for the result 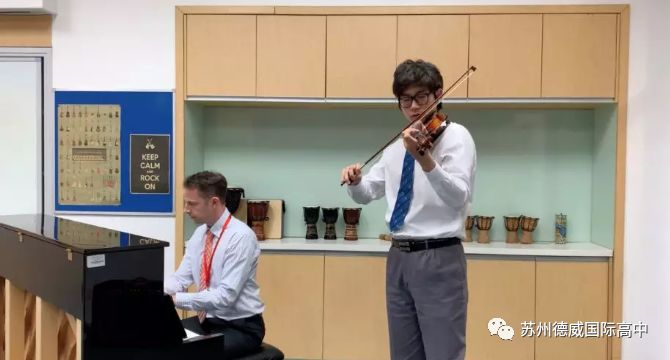 Economy, Geography and Music are an unusual combination of subjects, and there were only three students in the music course. George was then very surprised that the director of our school, Campbell Douglas, taught him music on a one-on-one basis in his office! Mr. Douglas is not only the director of Dulwich International High School Suzhou but is also a talented pianist, the director of music, and the conductor of the school orchestra.

“Taking the director’s class changed my impression of the school leaders. The director is very approachable and kindly reminds me when I make mistakes,” George said. He appreciates that Mr. Douglas helped him by providing the accompaniment for his 10-minute solo recording. George's musical skills have developed dramatically since he joined our school. He has had many new musical experiences here including conducting. As the music conductor, George led his team to win first place in the 2017 choir competition. Reflecting on this experience George said: “It  was  a really stressful time, but the experience was especially valuable."

Compared to other students, George's tie is special. “Only four students in the school have such a tie. The tie is a symbol of the vice president of the student union!”

While studying at our school, George joined in many extracurricular activities. As well as being the vice president of the student union, he is also the leader of the “Wings plan”, and the vice president and CFO of the Model United Nations. He thinks of himself as a working member of staff rather than a student and his classmates often say he is a “workaholic.”

He is very clear about what he wants to learn from those activities that he participates in. He said, “All the activities I participate in are related to management and service. I usually persist long enough to see some results and achievements based on what I have been working on.” 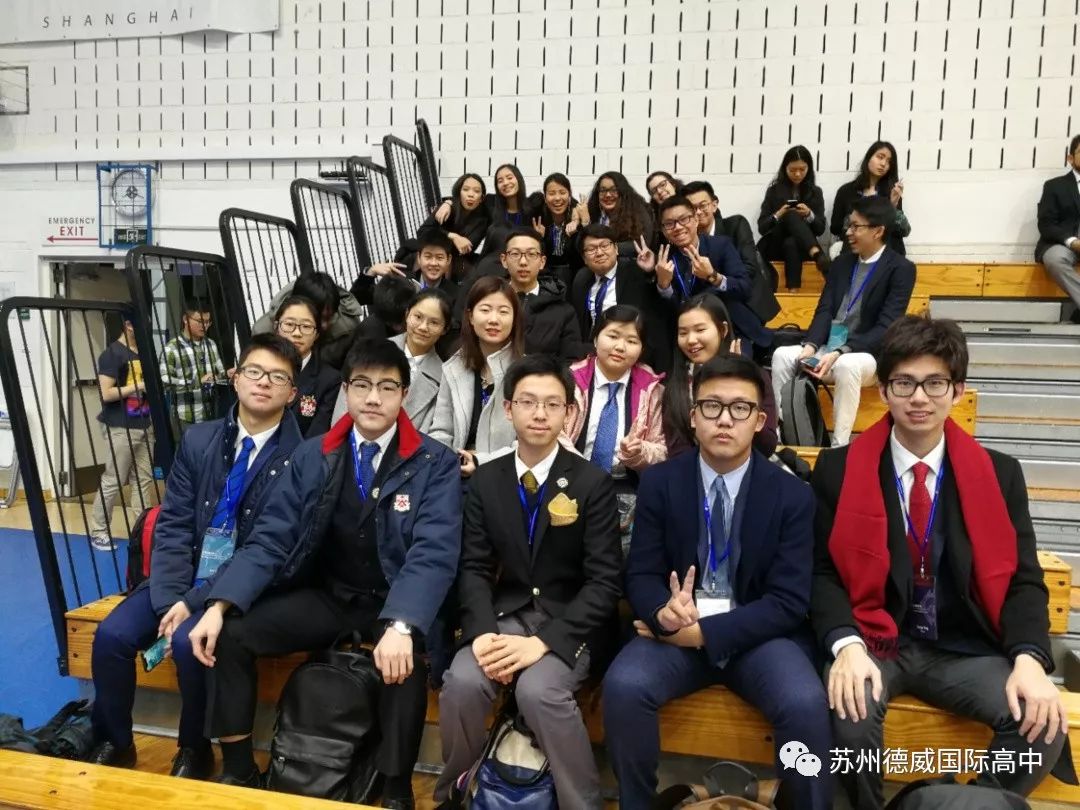 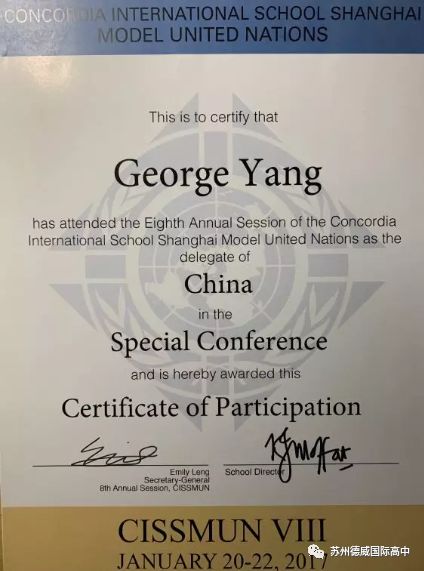 George’s experience of traveling abroad with the Model United Nations (MUN) for the first time was memorable. "While I have no problem in communicating in English at home, I was mute for three days there." After going back to China, many students left the Model United Nations, but George persisted. He then became a secretary of MUN and later was promoted to be the vice president of the MUN.

George is very proud that he gets involved in events of all sizes. All events have been held successfully with his participation.

The reason for his success is because of his high self-discipline. He gets up at 6am every day, starting the day with morning-reading.  He normally hands in his phone to the supervisor of his dorm at 9:45pm and then focuses on study. In general, he plans for every minute.

"Even though I do not have an amazing academic score, I participate enthusiastically in various activities. This may be one of the reasons why EHL gave me an offer."

In September this year, George will fly to Switzerland to further his studies. He has already arranged to learn French during his summer vacation. He said “Switzerland is a multilingual country, and although the school is in English. Knowing a bit of French or German will make life easier.”

For schoolmates who want to apply for a foreign university, George recommends planning early and joining in any extracurricular activities that are relevant to the future university study. You also need to learn something from the activities and make a positive contribution, instead of just joining the activities to benefit your university application!

George's maturity and thoughtfulness, as well as his persistence and commitment to his dreams has impressed everyone. 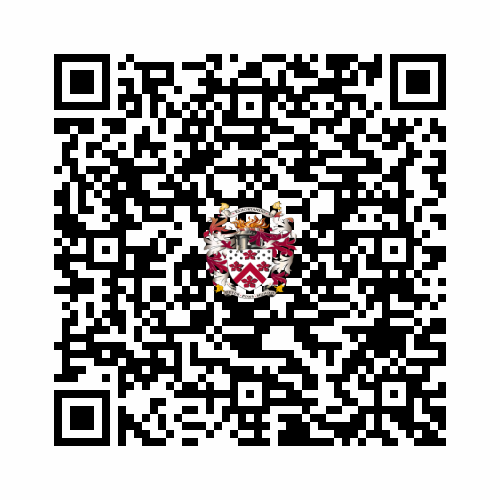