On Tuesday, the 24th of September 2019 we held the Dulwich International High School Suzhou Sports Day! Sport at Dulwich is a vitally important part of the House System. Sporting participation and active competition encourages leadership and showcases the importance of sportsmanship. Sporting Competition, in the context of the house system, allows our students to experience and celebrate success and achievement, while also learning how to lose with dignity. On sports day all of these elements come together when the whole school joins in and takes part.

In the morning the school split into two groups. The serious athletes all headed over to the nearby Suzhou High School Athletics track for the qualifying rounds of the Track and Field events. The remaining students all competed in a range of fun competitive activities in the gym and outside on the school AstroTurf. However, before the competitive fun activities started, our teams were fired up with a strong dose of house spirit and were taught motivational call and response chants such as "Fan, Fan, What's your Cry?" to which Fan house screamed a response of:  "V.I.C.T.O.R.Y."

After this, the fun activities started up with the students splitting into two groups, with half of them heading outside to the AstroTurf and half remaining in the Gym. The fun activities were as follows: 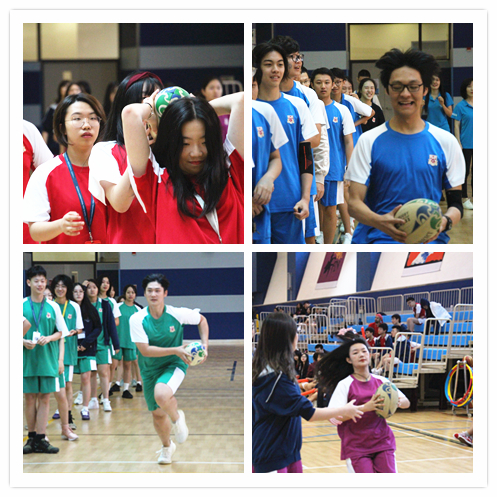 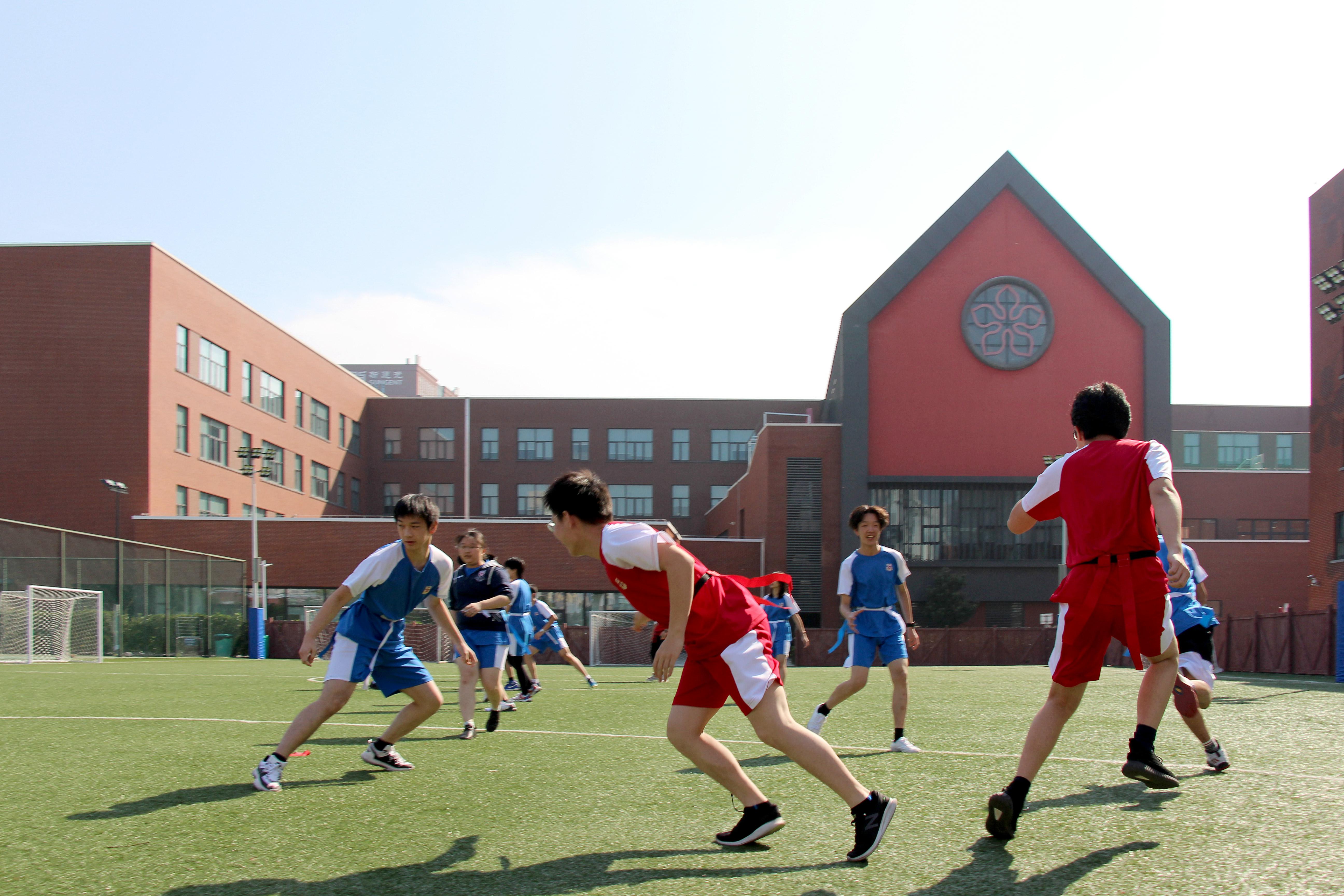 Rip Tag Rugby is a non-contact team game in which each player wears a belt that has two velcro tags attached to it, or shorts with velcro patches.  Attacking players attempt to dodge, evade and pass a rugby ball while defenders attempt to prevent them scoring by "tagging" – pulling a velcro attached tag from the ball carrier, rather than a full-contact tackle. Tag rugby is used in development and training by both rugby league and rugby union communities.

In the group Hoop race, competitors from each house formed a ring together by holding hands, while trying to pass a hula hoop around the circle in the quickest possible time. The important thing is that the circle must not be broken at any stage. This resulted in some of our more nimble students turning into contortionists as they tried to get through the hoop as quickly as possible! 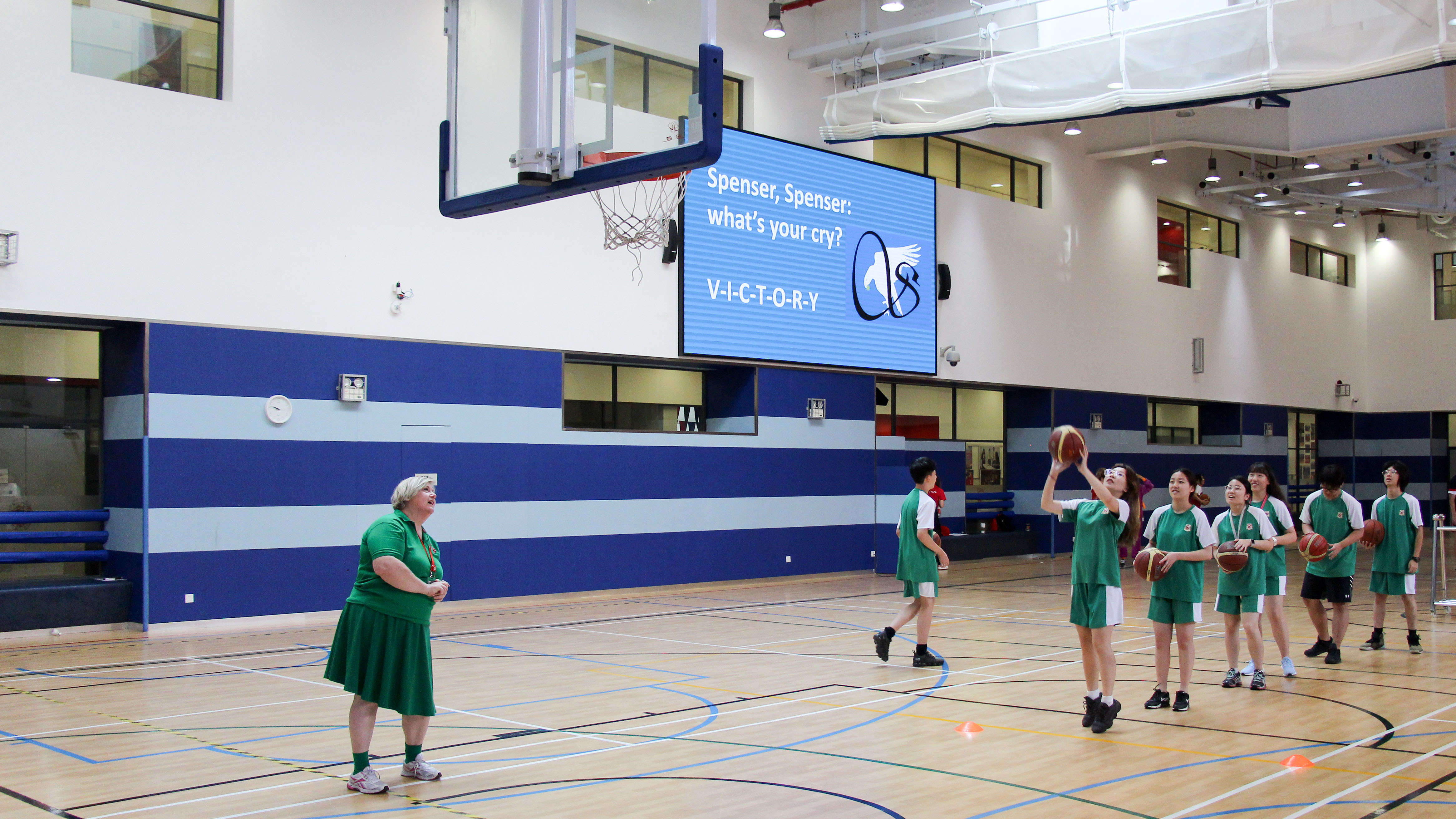 In the hoop shooting contest, teams competed to shoot basketball hoops with the greatest accuracy in the shortest time. The winning house was the one with the most hoops! 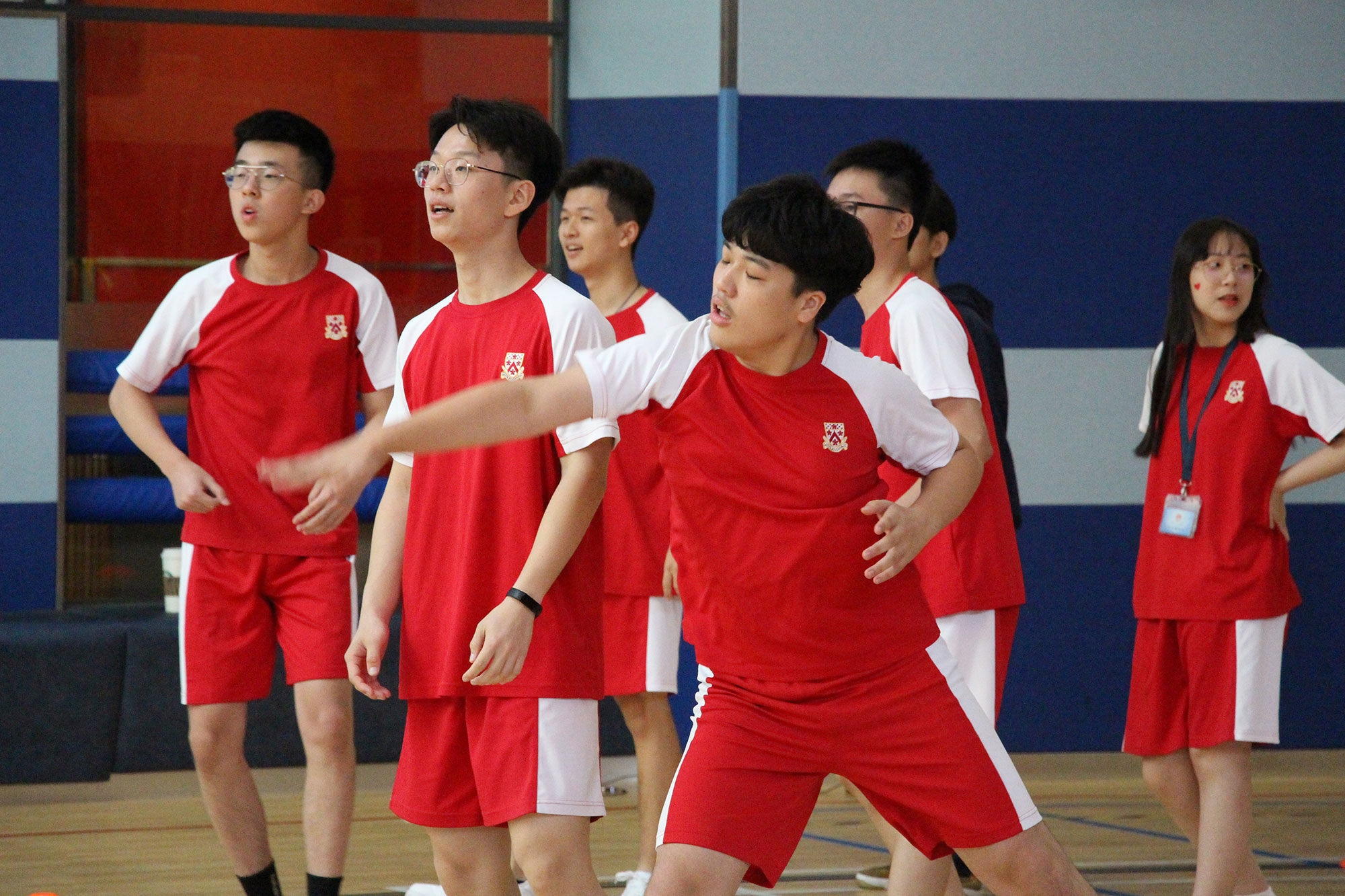 Dodgeball is a firm favourite with staff and students alike and needs no further explanation. Suffice it to say, balls were thrown with grit and determination on all sides and the dodging competition was fierce! 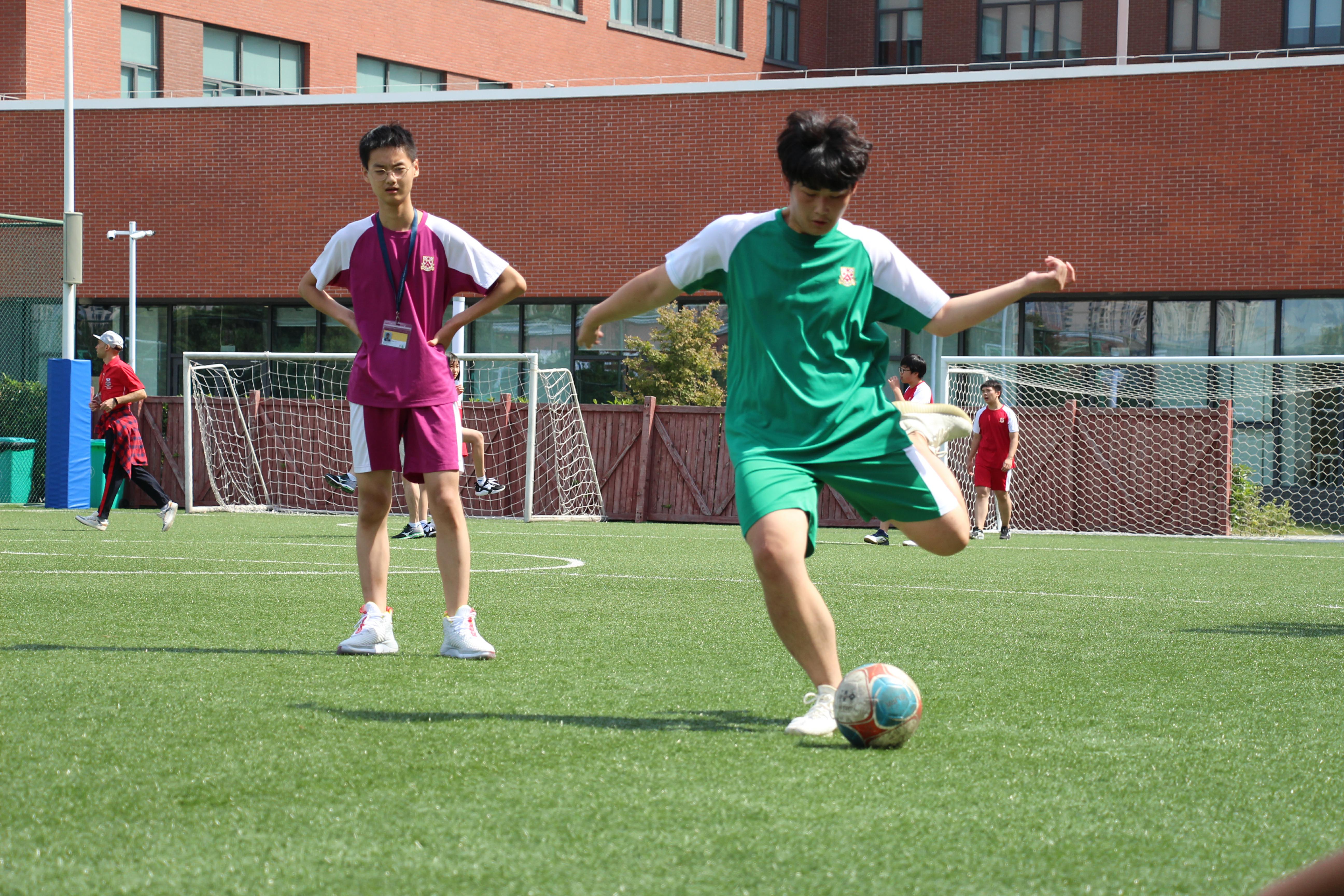 While the Hoop shooting was going on in the Gym, outside on the Astroturf it was Penalty Shoot Out time. Competing houses took turns to shoot at goal from the penalty spot. Just like all of the games, points were awarded to the house that did the best.

Leg Ball Running works much the way it sounds. You have to run from one side of the football pitch to the other while holding a ball between your legs. What was surprising here was the wide range of techniques deployed. Some of the players would waddle while others would leap dramatically. However, if you dropped the ball, a five-second penalty was applied. During this time, players had to remain motionless. This often resulted in a tortoise and the hare scenario whereby the slower more careful player beat their much faster opponents simply by not dropping the ball!

Attack of the Cones

The final fun activity of the morning was a game called Attack of the Cones. The objective was to throw balls from a great distance at a tower of carefully constructed cones (in your own houses colour). Once this tower was successfully demolished, players could then target the central tower of yellow cones in order to win the contest. Accuracy was of paramount importance since if you knocked over your opponent's cones by mistake, you would help them on the road to victory! 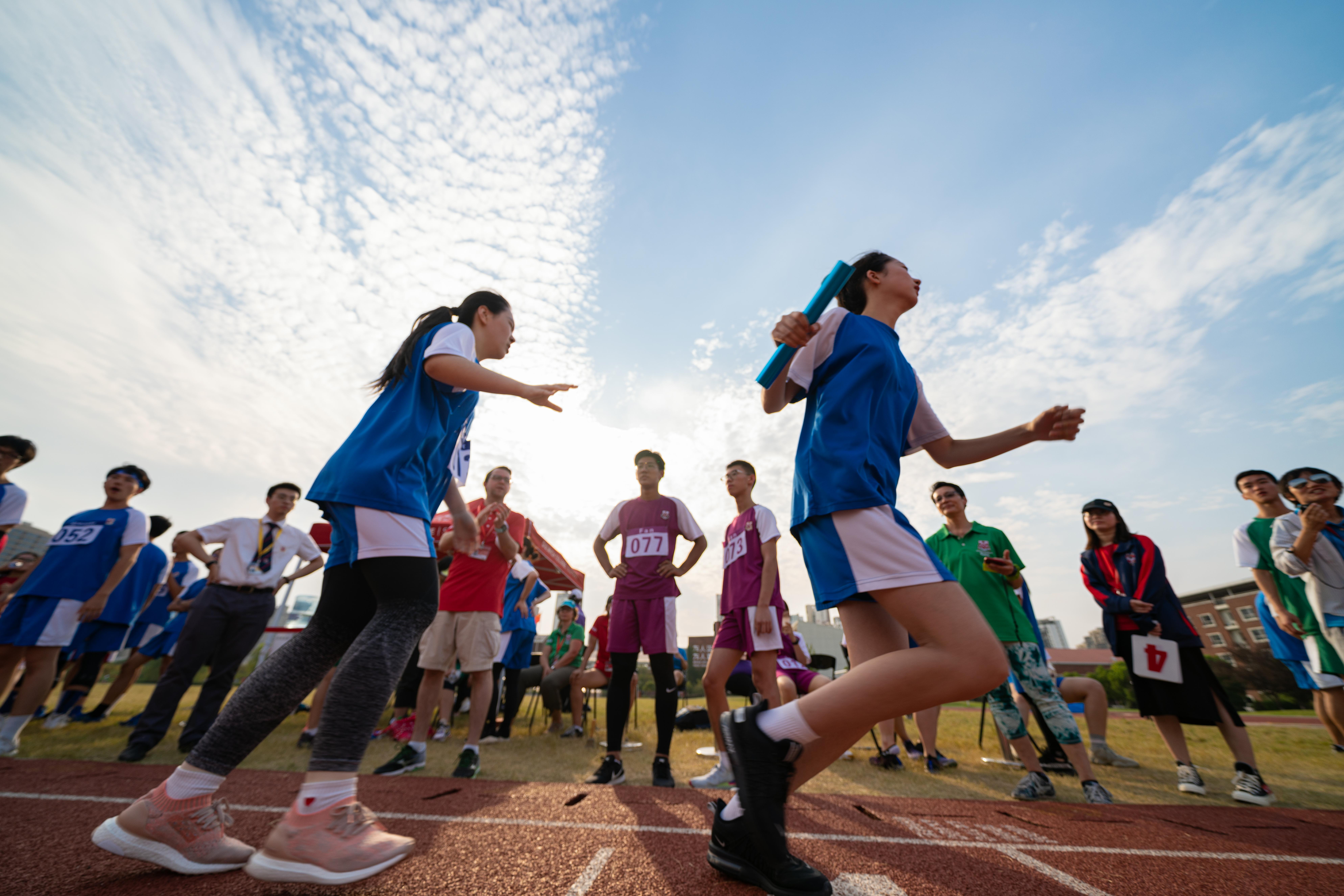 Meanwhile over at the Athletics Track…

While all these fun activities were taking place at our school, Athletes from each of our four houses were competing in earnest in the heats over at the Suzhou High School Athletics track. This was how the morning panned out for our athletes: 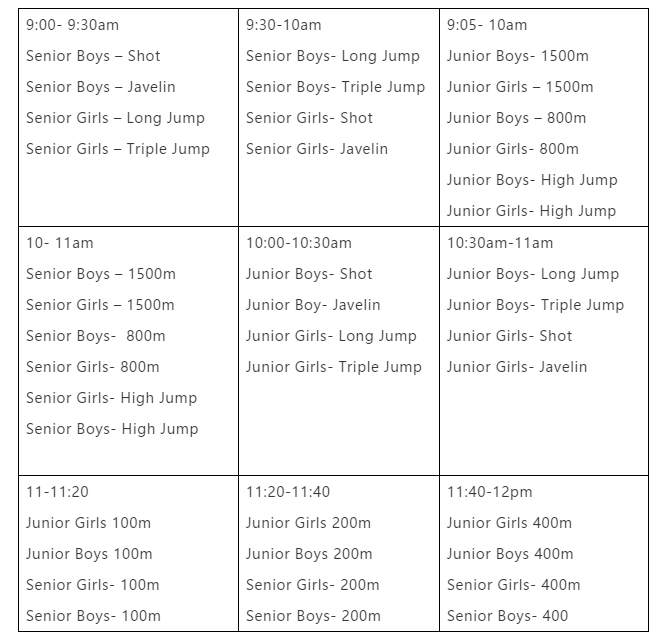 In the afternoon, all staff and students made their way over to the Suzhou High School Athletics track, for the finals of all the track events as well as the tug of war. The tug of war is one of the highlights of sports day, as it is an event that staff, as well as students, participate in. Everyone takes it very seriously indeed.

Throughout the afternoon, medals were awarded to our victorious athletes in both track and field events. The scores were added up and totalled, double-checked and recounted. The winning house ribbons were tied on to the trophy cup. Finally, it was determined that the winner of the Dulwich International High School Suzhou Sports Day 2019 was -- Fan House!

This was a well-deserved victory for Fan, however, all of our houses competed with great spirit and an overriding sense of sportsmanship throughout the day. The students that participated in the fun activities in the morning provided the backbone of house spirit for their respective houses in the afternoon. All our staff and students had a wonderful day that they won't forget!